How fingerprints can help save money and the planet

A few years ago, the British government commissioned a survey looking into how households in the country use energy and it is not just of interest to politicians and power engineers; households can learn from what it found out about how average British people use power in their homes.

The colourful chart below looks complicated, but it just represents a typical day in a typical British home. The time of day (in the 24-hour clock) is at the bottom, running from midnight to midnight, with midday (1200) half-way along. 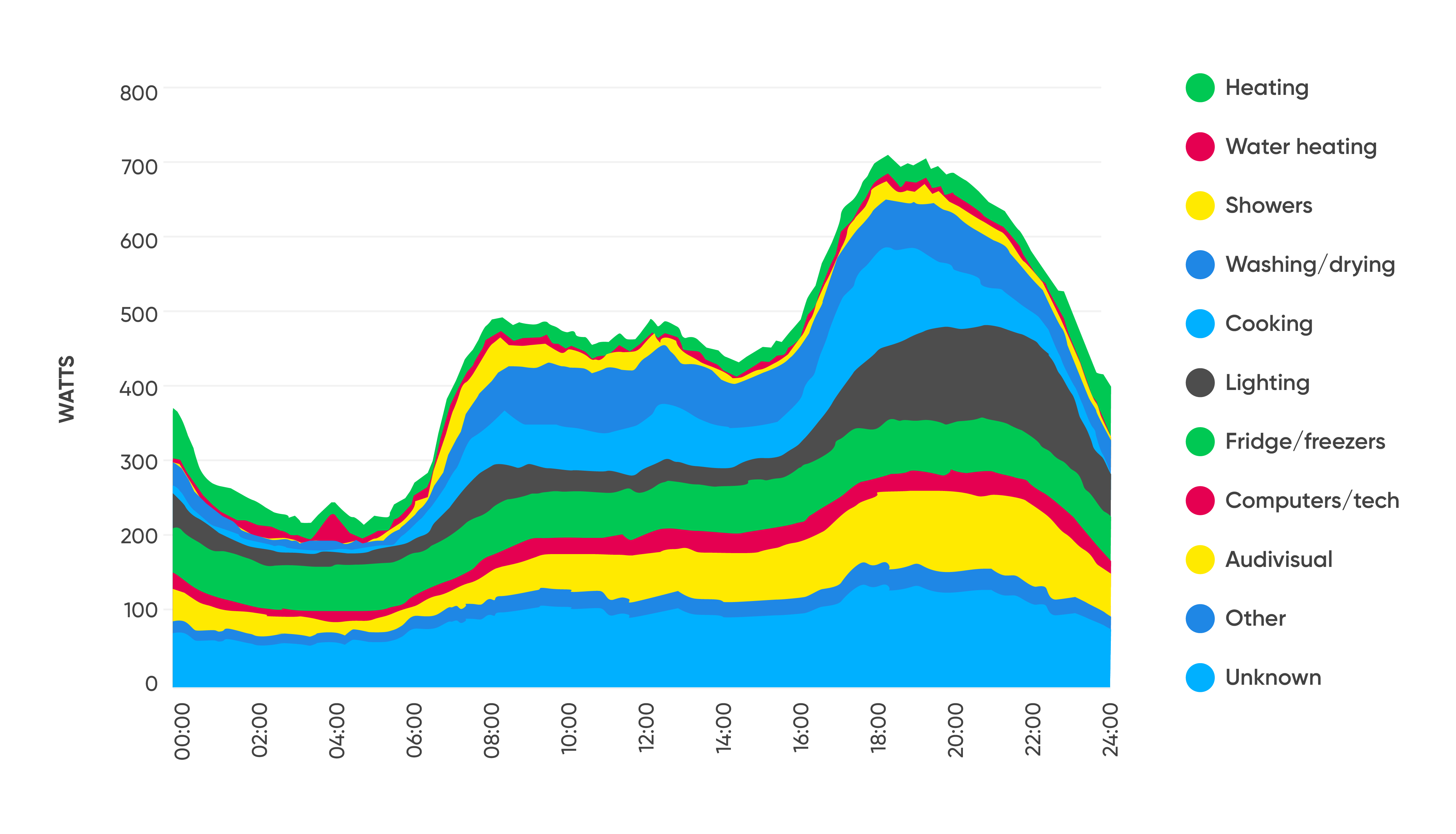 There are some things that are obvious even to the untrained eye – we tend not to use much electricity between midnight and six in the morning, but we use loads between six and eight at night when everyone has finished work and school.

Looking at the colours can also tell us what we are doing when. Most of our washing and drying (the light brown) happens in the daytime, the cooking is generally done at 6pm (the dark orange) and we turn the lights on when it gets dark in the evenings (yellow).

There are also some more subtle things hidden in the chart. Note how the power used by fridges and freezers stays the same all through the day. It’s obvious when you think about it, you wouldn’t want your food to go off, so you leave them on for 24 hours a day.

But look at the green band which represents the electricity usage of our audiovisual equipment like TVs. The power use varies through the day but even at night this equipment is still using power. Unlike fridges and freezers, we don’t need to leave these devices on throughout the day but often we do anyway, putting them into standby. That’s a lot of wasted electricity – and money - right there.

When this survey was done several years ago, it took a long time to collate the energy. What the survey also reveals is that everyone’s power usage is different – this peacock coloured chart is an average of 250 households.

Wouldn’t it be amazing if we could do this almost instantaneously for every individual house? Well we can.

Helping our customers get smarter

We have been gathering actionable data on home power use ever since 2005 when we installed Britain’s first smart meter and in the last couple of years, we have been looking at this data every half an hour to create a feature of the popular My Utilita app called Smart Score.

Smart Score uses the information we get from our smart meters to give households star ratings on their energy use, both for electricity and gas. For electricity users, it gives you ratings of up to five stars for devices on standby, power-hungry devices (electric heaters and power showers, for example), daytime use and overnight use. We have been giving our customers tips on how they can improve their ratings in these areas. It’s not just about getting more stars, it translates into bigger savings for you.

Utilita is now using its smart technology to go to the next level.

We are currently trialling a new feature called My Energy that will give you an even better idea of which devices are costing you money to run.

Rather like human fingerprints, appliances and devices are very recognisable by the power ‘fingerprint’ they leave on your energy use. The smart technology behind My Energy looks at your power usage as often as every ten seconds and can recognise these fingerprints as they are left.

People, power, pounds and the planet

We then use artificial intelligence to turn these fingerprints into knowledge you can use to cut your bills.

The new In-Home Displays that we are installing in households around the country can now look at what devices you are using every ten seconds by recognising those fingerprints. Rather than just giving people star ratings, My Energy shows the cost of what you are doing – and what you are not doing.

We are currently beta-testing with 100 customers.

One of those testing it was our CEO Bill Bullen. Bill has been in the industry for a long time so knows a lot about power. Even so, when Bill saw how much – in pounds and pence – he was spending on leaving his devices on standby, he vowed to change his behaviour and turn off his devices when they were not in use.

Even if you’re pretty smart already, Utilita’s smart tech can still help you save money. And by saving money, you will also be saving carbon and the planet will thank you for being smart too.