When I heard that the National Grid was selling a smart lightbulb to show households how green their electricity supply is, I breathed a sigh of relief for the planet.

Why? Because it was a major step towards the end of greenwashing. The new lightbulb innovation glows green “when the electricity in your local area starts to be supplied mainly from clean or green energy sources, such as wind or solar”. This means households will start to question why the electricity powering their home is not always glowing green when they are on a so-called ‘green tariff’.

Most of the electricity our homes use is generated by large, centralised wind and solar farms, which are good for the environment, or large, polluting power stations located far away from populated areas. Once generated, this electricity is put onto the national network of overhead cables (pylons), known as the National Grid, where it gets mixed up and transported all over the country. By the time the energy reaches our homes, it’s a mixture of both the good and bad stuff.

Energy suppliers provide homes with electricity from the National Grid, and those suppliers who sell ‘green’ tariffs simply offset the polluting part by reducing carbon in other ways. This approach is called net zero, as they are cancelling out the impact they are having on the environment. Net zero is a great approach, but only if the claims are true.

Does it matter, pure green or net zero, who cares? Mother Earth cares.

About a third (30%) of consumers who have been led to believe they are on a 100% renewable tariff say they are more inclined to waste energy at home ‘as it won’t impact the environment’. This lack of transparency or ‘greenwashing’ is a recipe for disaster – about 50% of the energy they are using and wasting is still coming from a polluting power station.

For this reason, Utilita is calling on the energy regulator to stop tariffs from being called green if they aren’t, and ensure they are called net-zero, instead.

The only time tariffs can be described as ‘green’ is when the electricity supplied is piped to properties directly from the renewable source.

We must regulate suppliers claiming to provide net zero tariffs

Suppliers making net zero claims must be regulated to ensure they are offsetting effectively and responsibly, and not making false claims. Unfortunately, many do.

All consumers are already paying for green energy

For every £1 you spend on your electricity, about 25p goes to the Government in tax. This is mandatory, it doesn’t matter who your supplier is, all electricity prices have this built in.

The Government uses this money to make electricity greener. This subsidy is paid to companies that build and run wind and solar farms. Companies who build gas and coal power stations don’t get this money. This means companies are incentivised to build green sources of electricity instead of brown or ‘bad’ sources.

This 25p is enough to offset about half the pollution caused by consuming national grid electricity. So, our electricity is already 50% net zero - without having a green tariff!

Buying REGOs or green electricity does the same thing. They both ensure one unit of green electricity has been generated at some point and can therefore both be used to offset the initial environmental impact of using electricity straight from the National Grid.

All subsidised REGOs and subsidised green electricity produced today is only enough to offset around half of the environmental impact of consuming National Grid electricity. So, how can any provider sell a 100% net-zero tariff? There must be something else going on, and there is.

There is nothing stopping energy providers buying enough subsidised REGOs or subsidised green electricity to match all of their customers’ electricity consumption and claiming their energy is “100% renewable”. This is despite subsidies only paying for enough green electricity to offset half of the environmental impact. The other half of the positive impact these companies are claiming is false. This is called greenwashing, and right now there is nothing stopping energy suppliers doing it.

Energy suppliers should not need to pay for REGOs that relate to subsidised green electricity. This would mean suppliers can correctly show their electricity is 50% net zero as standard, which is what customers are already paying for through subsidies they pay for. The transition to low carbon electricity must be equitable and fair. All customers contribute to the greenness of electricity and should be able to see that contribution in the fuel mix they receive.

How does all this effect the mix of electricity Utilita sells?

Utilita is aiming to be a net-zero organisation by 2030, with annual targets to meet. This means we must work towards increasing the amount of electricity we supply from greener sources. By 2030 we aim to sell 100% renewable electricity. 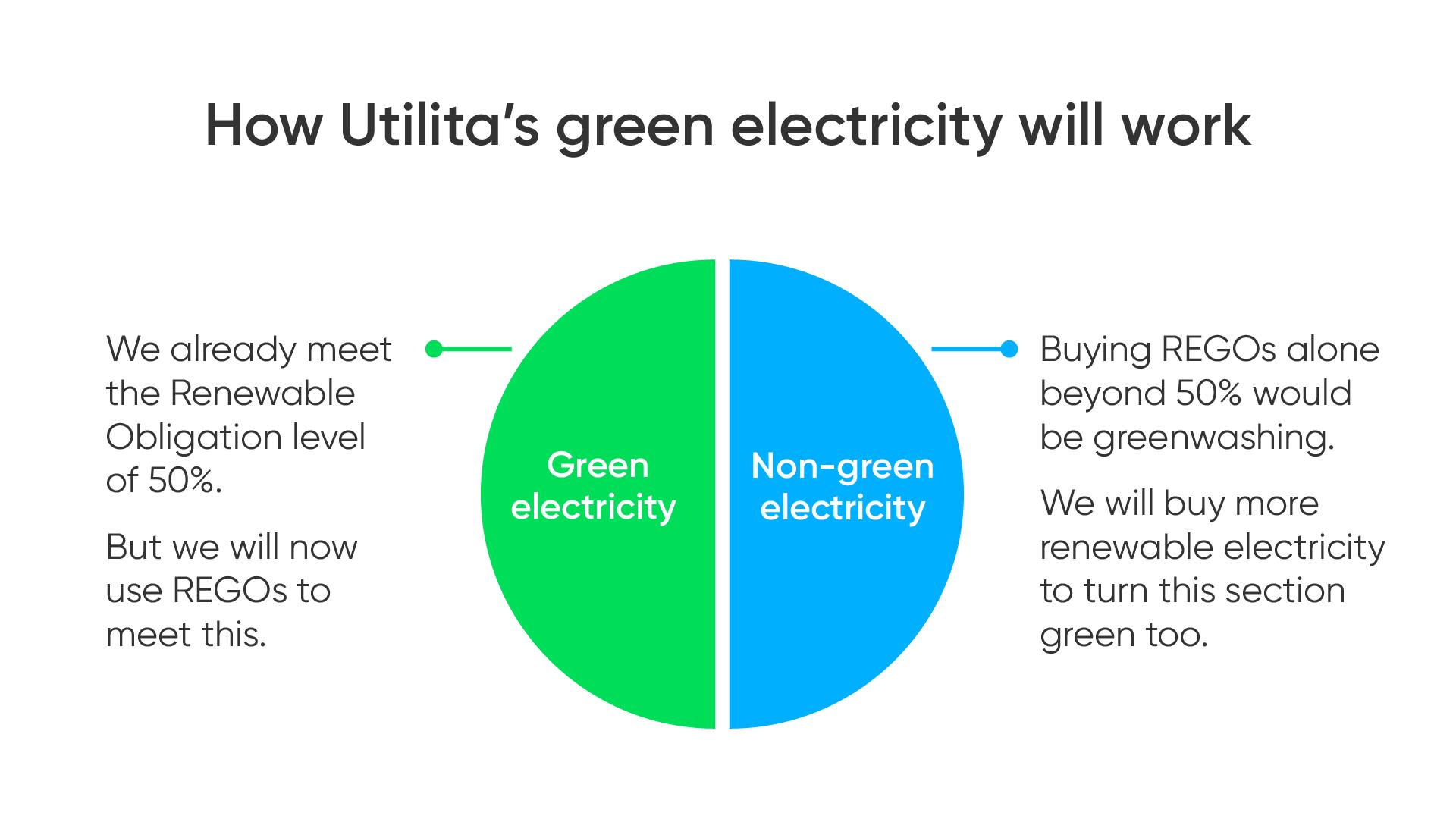